I am using PostgreSQL-9.3 on Ubuntu-14.04 and using "/usr/share/pgadmin3/pgagent.sql" I have configured my pgAdmin3 to use pgAgent. postgres is my maintenance Db and I have run the pgagent.sql content into it's SQL editor to bring the "Jobs" node in pgAdmin3-gui.

In order to check how does this pgAgent works, I made a sample Db and then a test table under it. I have properly configure the "Steps" and "Schedule" parameters. But after starting this newly created job from the Job node using "right-click and run now", my step is running just once and then it's not terminating after the execution. I am sure that my SQL and other parameters are right since I have seen the table modification after the very first run of the step but then the step is not terminating. It's a simple insert SQL command.

Any help regarding why the step is not terminating? 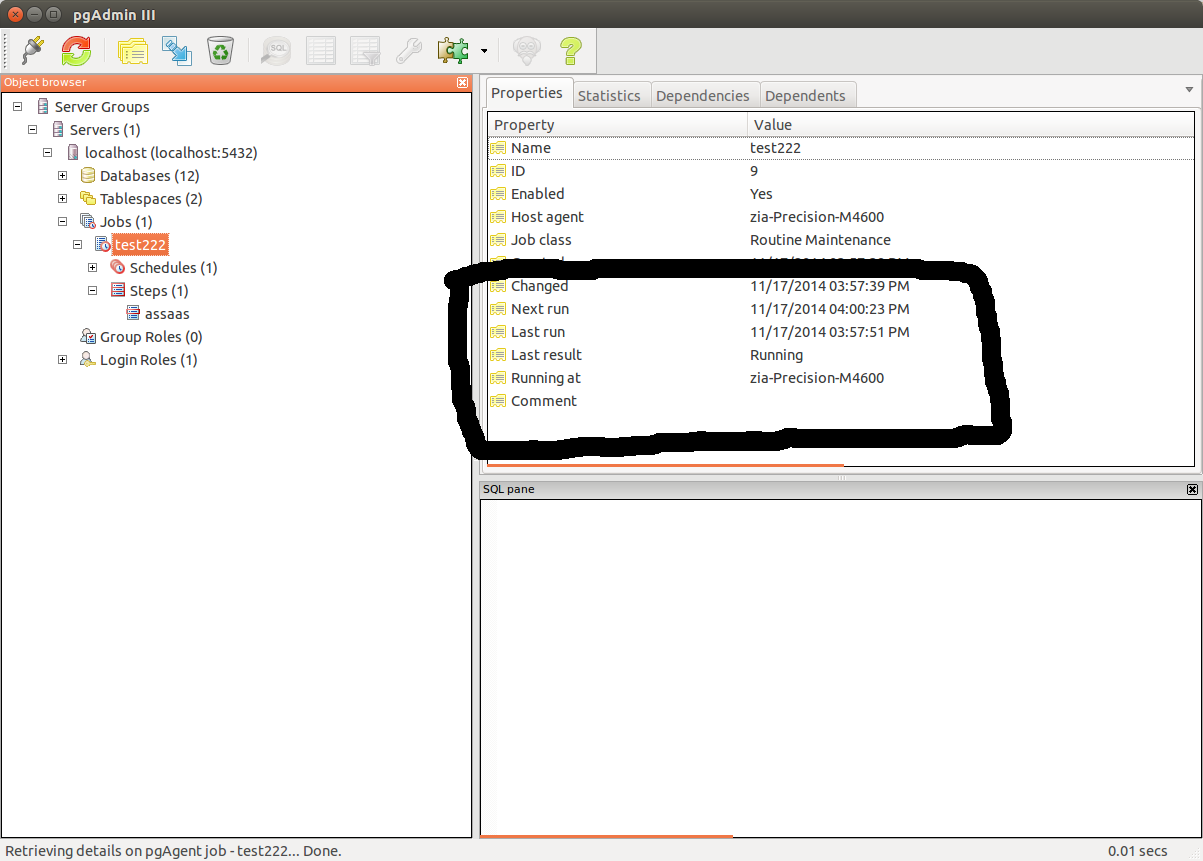 This was a bug in pgagent, it has been fixed in http://git.postgresql.org/gitweb/?p=pgagent.git;a=commitdiff;h=f9bf1ccb27ebcfce00e7a6d467bc0e1b5ee9555e.

try setting pgpass.conf in your AppData postgresql directory, then set the content: localhost:5432:*:postgres:

Maybe the issue last result keep "running" is because you don't have access to other DB except "postgres db".

I was running into similar issues with pgAgent all the time, as at my company we used it pretty heavily. The reason it stays "running" is because the pgAgent service crashed and was unable to update the logging row. Like tkrennwa said, that was most likely caused by that bug.

The issue is, i've run into too many of those types of bugs with pgAgent where it'll crash. Even compiling it on a new machine is way too time consuming though due to it's inexplicable dependencies.

That led me to write a new scheduler (called jpgAgent) as a replacement. It is compatible with the existing pgAgent schema, and is a drop in replacement.

Not the answer you're looking for? Browse other questions tagged postgresql pgadmin pgagent or ask your own question.

2
postgresql pgadmin3 queryconnect attribute does not work
1
PostgreSQL newbie - how to create objects in a database
0
pgAgent : how to configure pgpass.conf for a local connection on Windows Server 2008
2
pgAgent not working on linux (Ubuntu 14.04)
0
postgresql.conf file found in both /usr/share/postgresql and /etc/postgresql/
5
Upgrade from Postgres 9.3 to 9.5
0
PostgreSQL corrupted after running pg_resetxlog
4
Why doesn't pgAgent run my job every minute?
0
PostgreSQLpgagent “Running at: is not runing”