For one of my server with below configuration i am continuously receiving alerts for low PLE which ranges between 20- 400 and an average of 90-100 in a day:

Databases : System and 2 user DB's with max size of DB being 54 GB

I analysed and found that one of the User DB A was using 8 GB RAM as per the blog from Paul Randal:Additionally i analysed for a period of time and saw tempdb using at an avg of 3-4 GB of RAM

Then with further investigation i went and found that in that database A there was a table having a clustered index consuming on average 6-6.5 GB of the memory.( Fragmentation is not an issue as its been checked)

Now from here i am unsure how to proceed? should i go and create the missing indexes or can drop the unused? or there is something else i need to dig in before making any conclusion.

I don't think there is any issue because of this, this is totally normal looking at this you cannot draw any conclusion.

A there was a table having a clustered index consuming on average 6-6.5 GB of the memory

I guess this table is biggest table of database which is consuming most part of buffer pool. I cannot upfront say about why table is holding so much memory so again you should first apply SP3 to rule out any possibility of leaks and then move with troubleshooting.

For one of my server with below configuration i am continuously receiving alerts for low PLE which ranges between 20- 400 and an average of 90-100 in a day:

For a system with 12 G RAM PLE should be around 900. But since you say its always around 300-400 which makes me thing SQL Server has to work hard and move pages frequently out of memory to disk because of memory pressure. To confirm memory pressure you have to rely on other counters not just PLE you can open perfmon and add following counters. It would be best Create a Data Collector Set to Monitor Performance Counters

Please note: the value for above counters should be collected for at least 3-4 hours and when load on system is relatively very high. If possible before collecting the values please flush buffer cache , although I am not saying you to do it I know for Prod system it would not be possible. If you would produce the values I could analyze it for you.

I have no idea about workload of the system and just giving you option how to proceed. You should also analyze costly queries. Look for one that involves hash joins and sorts.

A bad query with does lots of joins and scans on large table has all capacity to bring counters like PLE,memory grants, free list stalls to value which make syou believe its memory pressure, ya it is but the cause is poor query and missing indexes and incorrect join. You should also consider this. 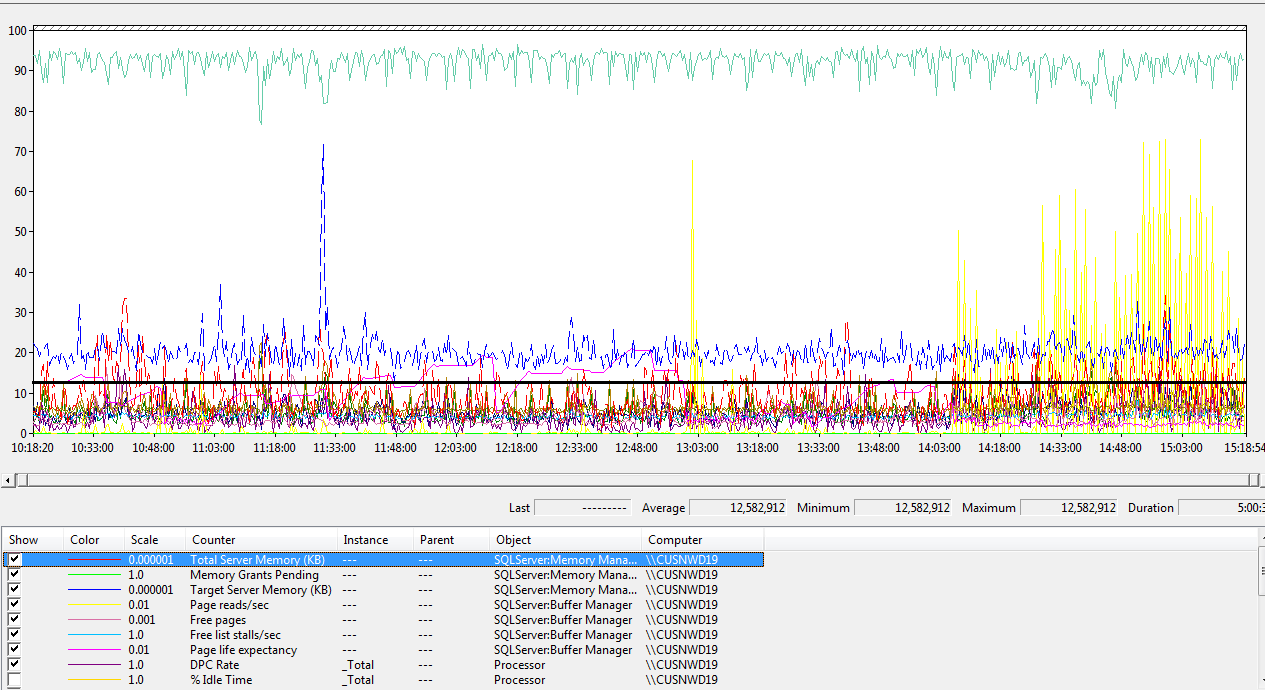 Below are some notable points

You need to find out what query is running after 2:00 PM and it was still running so it makes me think there is process.job starting at 2:00 PM. This process/job/query is trying to read too many pages which is causing lazywriter to flush too many pages because query is requesting space for such pages

It can be that such query is missing index, can be that its creating a bad plan due to skewed statistics, it can be that query needs to be written to get/read only subset of data not whole data.

Not the answer you're looking for? Browse other questions tagged sql-server-2008-r2 index-tuning performance clustered-index performance-tuning or ask your own question.

21
SQL Server - Anyone use SUMA, trace flag 8048, or trace flag 8015?
4
How can a connection for one DB block a connection to another DB in SQL Server?
29
What is a deterministic method for evaluating a sensible buffer pool size?
2
OS Paging too high in sql server
6
How can I Debug a Buffer Issue?
5
SQLServer:Buffer Cache Hit ratio is a good indication of POSSIBLE memory bottleneck?
5
SQL, SQLCLR objects & effective memory utilization
1
Activity Monitor (SSMS) timeout error on Sql server instance