I'm designing a database for a new project and I'm looking for some feedback on the design before I start to implement/test. It basically consists of users, events, user profiles and a messaging system.

Certain users can create events which others can view, this is determined from the userType table. I'm unsure if I should be storing the lost password columns in the users table, would there any benefit for using a separate table for this?

(I'm not to sure if my relationships are setup correctly) 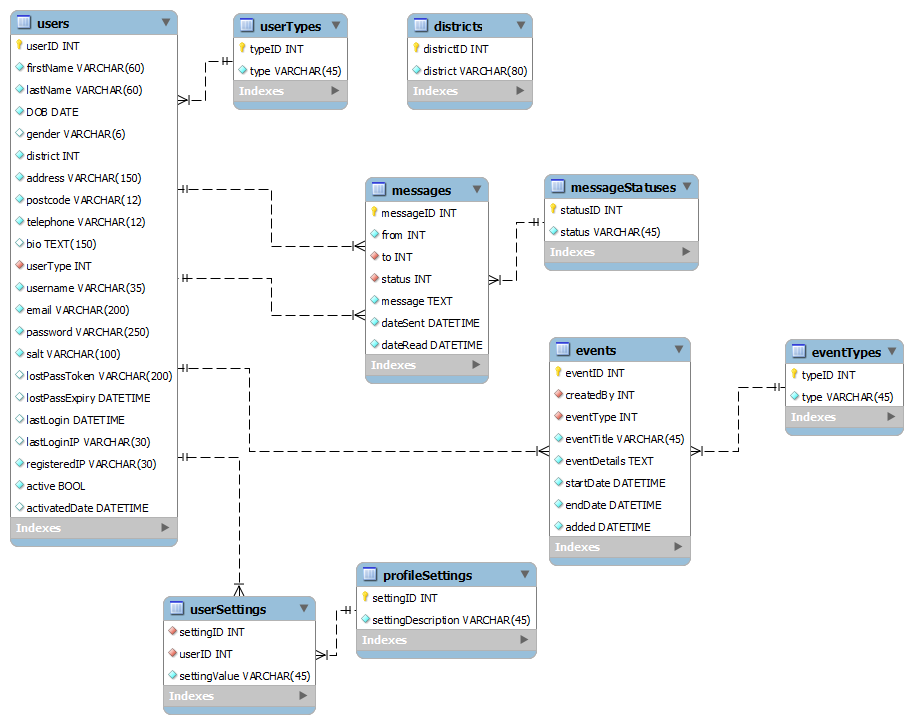 Appreciate any feedback given =)

Having the users and lost passwords in the same table implies a 1-1 (or 1-0/1) relationship; 1 user has 1 lost password (or none, if the column is nullable).

If that's the cardinality of the relationship, having them on the same table is correct. The school of thought that refuses nulls (which depending on the day, I adhere to), says that if the relationship is 1-0/1, you should:

The relationships look fine, however, I would suggest you use a diagramming tool which shows which are the columns referenced. Surprisingly, I've only found SchemaSpy doing this: http://schemaspy.sourceforge.net/sample/diagrams/summary/relationships.real.compact.png

4
How can I improve this design?
1
Is this good/bad database design and why?
1
Elegant Database Design
4
Implementing User Privacy Settings with MySQL Database
4
Database Design Review - How to model a business domain about posting groups?
13
Modelling a database structure for multiple user types and their contact information
2
Could I get some feedback on my first normalisation design?
0
Database design: User table and relationships
1
Database schema design implementation feedback