Is there a (non-binary) MySQL collation that doesn't treat different mathematical symbols as the same character?

I've run into a real headache with MySQL's collations and non-BMP characters (ones with Unicode codepoints above U+FFFF).

(You may not have a font to display the character in the string literal above. It's U+1D542 MATHEMATICAL DOUBLE-STRUCK CAPITAL K)

So far so good. But then there's this crap:

(The string literal above has U+1D543 MATHEMATICAL DOUBLE-STRUCK CAPITAL L. Note that MySQL's error message has a ?, but the U+1D542 in the results of the SELECT above does dispaly correctly for me, so there don't seem to be encoding issues as far as IO with the server.)

(Code above updated; it originally had 1 for the primary key, which fails for obvious reasons.)

Screenshot for those with font issues: 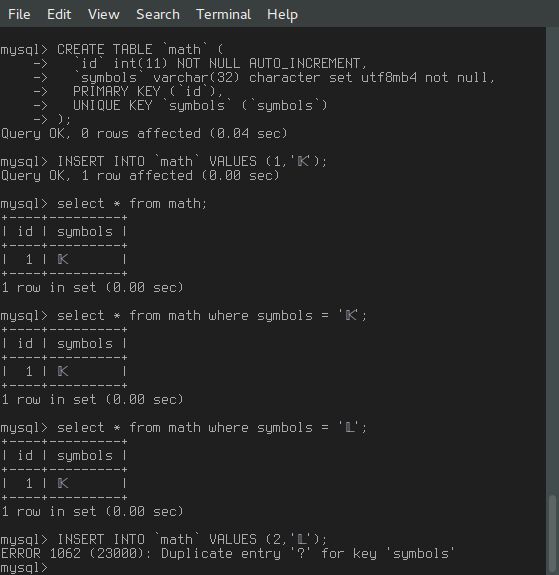 So, MySQL thinks these two characters are the same? I know it case-folds, but this isn't a matter of casing.

Needless to say, I didn't even realize I had this problem till it came up in production, because the real-world data involved rarely differs on only these characters. However, this is totally unacceptable collation behavior.

Switching to the binary collation does fix it, however I'm using Django to access the database, and when I use a binary collation it then gives me bytes instead of characters (I can decode them myself, but that's a big pain).

I'm guessing the issue has something to do with these character being outside the BMP, but it still surprising bad behavior.

Is there a way to get MySQL to use sensible collation, short of writing and installing one myself?

I suspect the non-BMP characters are the problem, since I also tried:

(I can't link these to codepoints.net, since I don't have enough reputation. Should be fairly obvious what their URLs are though.)

So the answer to your question appears to be "no".

If you really want rows sorted by MySQL's rule and secondarily by code point value, it is easy:

Though it is not clear to me how this should be applied for comparisons.

The documentation extracts quoted above are unchanged for MySQL 5.7.

could you compare using binary but return the string? Something like

is how it would be done in MSSQL.

Not the answer you're looking for? Browse other questions tagged mysql-5.5 collation unicode or ask your own question.