I have a problem using multiple joins in one SQL Statement. For example, I have 10 Tables which are tbl1, tbl2, tbl3,..,tbl10. I would like to select some columns from each table.

If I use joins in between, I don't know how to use Left, Right, etc. in the SQL statement from priority aspect. I mean is it organized with parentheses or something else? 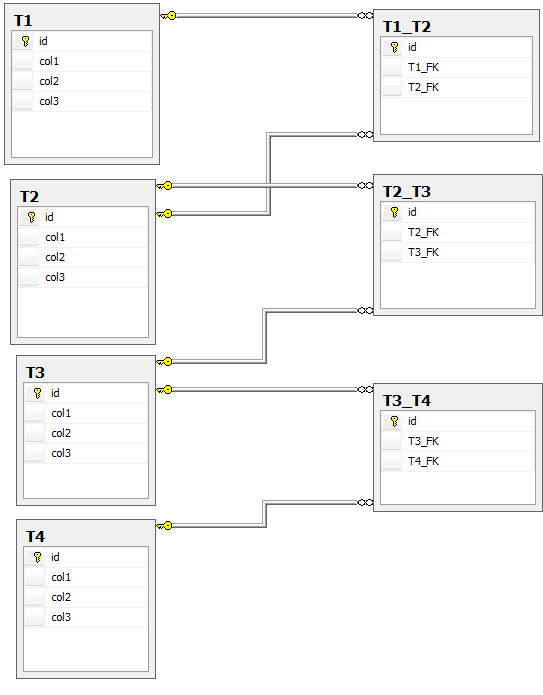 My query is as following:

How does SQL Server interpret the joins? Can one represent it like execution priorities with parentheses? I mean: ((T1 INNER Join T1_T2) INNER JOIN T2) LEFT JOIN T2_T3) ?

The join order appears unimportant to the query final result given your mapped table equalities.

The order of table sources after the FROM keyword does not affect the result set that is returned.

That said, you could, if order is very important to your process, or results, consider nested Common Table Expressions

I am writing the sql query but it will depend on your table structure . How many there is PK and FK in your each table.

Not the answer you're looking for? Browse other questions tagged sql-server join or ask your own question.

18
SQL Server Join/where processing order
29
What is the most efficient way to get the minimum of multiple columns on SQL Server 2005?
0
Performance: order of tables in joined statement
1
Delete from table where not in another table using two columns
2
Include NULL row on join
0
changing from inner joins to left joins to include null values?
1
UPDATE in combination with nested SELECT queries and LEFT OUTER JOIN
0
How to efficiently handle querying for different combinations of optional parameters
3
What could cause a sleeping session to have an open transaction?