Displaying only the most recent activity of an item

I have made a database that tracks the shipping and receiving of the tools that my company has. I am now wanting to make a query that shows only the most recent activity of all the tools. I have a current query that works pretty well but does not do exactly what I would like.

This is currently what the query is showing: 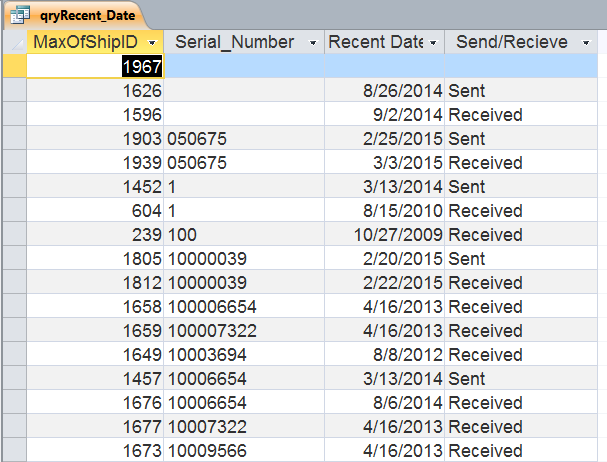 This shows roughly what I want. The only problem is that as you can see bellow it allows Serial_Number to be listed twice. Once for when it was sent and once when it was received. I only want it to display the most recent of the sent and receive.

For example instead of having the serial number 050675 listed once on 2/25/2015 as sent and once on 3/3/2015 as received I would only have the activity on 3/3/2015. And I cannot just limit it to looking for when the item is received because if you look at Serial_Number 1 the most recent item is Sent.

So far I have tried nesting IIf statements and also tried the DMax function and i was unsuccessful on both of them.

This is what I am thinking it should look like. I know this is very very rough but I really do not know how to or what I should use in coding this.

This is the table that the data is being pulled from:

In your specific case:

Not the answer you're looking for? Browse other questions tagged ms-access or ask your own question.

1
Minimum value on most recent date per account MS ACCESS SQL
21
Access (Jet) SQL: DateTime stamps in TableB flanking each DateTime stamp in TableA
8
SQL queries to only show most recent purchase records for individual food items
0
How do I get a linked list to display more then just the first search item in Access?
1
How do I calculate a field based on multiple non-numeric records