If we query the cached plans as below:

then we appear to have about 90 MB being used in total for cached plans, with only 2MB being used for Adhoc plans. There are only 300 plans in the cache too.

However, if we look at the dm_os_memory_clerks view as below:

then it is reporting that roughly 12 GB is being used. Our instance has approx. 300 GB of RAM in it.

We'd like to understand the discrepancy, and ideally take some steps to ensure that the plan cache is used effectively (i.e. has more than 300 plans in it to improve the cache hit ratio which is currently very poor). Being able to account for this space would be the first step.

Any thoughts on what the discrepancy could be and why this space is not being used for caching plans?

FWIW - and I'm only posting this as a temporary answer because there's no way I could make this a digestible comment - I ran these queries and saw some discrepancies as well:

Most notably, the CACHESTORE_SQLCP total in the second query is less than the four Compiled Plan results in the first query, and there was substantial memory clerk usage under other cachestores as well. This is a lowly VM that doesn't have 300 GB of RAM but still demonstrates that these numbers do not always correlate and add up nicely. 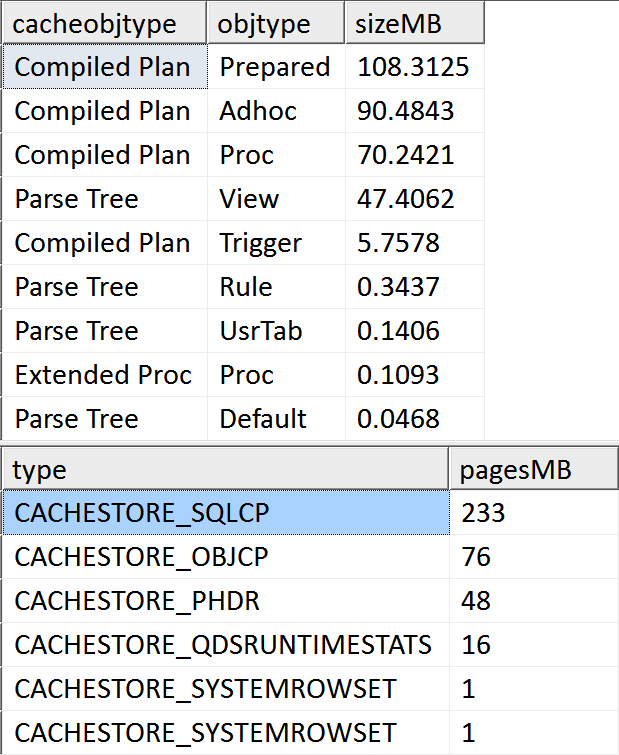 Not the answer you're looking for? Browse other questions tagged sql-server sql-server-2014 dmv or ask your own question.