Select all records, join with table A if join exists, table B if not

So here's my scenario:

I'm working on Localization for a project of mine, and typically I would go about doing this in the C# code, however I want to do this in SQL a bit more since I am trying to buff up my SQL a bit.

Note: the programming language itself should be irrelevant, I'm only including it for completeness.

So I sort-of accomplished what I wanted, but not to the extent I wanted. It's been a while (at least a year) since I have done any SQL JOINs except basic ones, and this is quite a complex JOIN.

Here is a diagramme of the relevant tables of the database. (There are plenty more, but not necessary for this portion.) 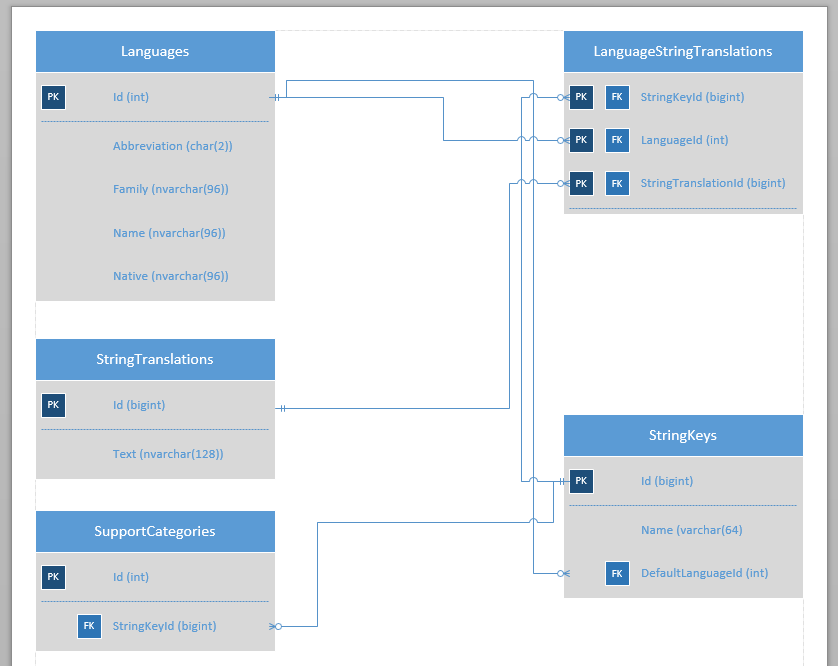 All relationships described in the image are complete in the database - the PK and FK constraints are all setup and operating. None of the columns described are nullable. All the tables have the schema dbo.

Now, I have a query which almost does what I want: that is, given ANY Id of SupportCategories and ANY Id of Languages, it will return either:

My query, be it a mess, is as follows:

The problem is that it is not capable of providing me ALL of the SupportCategories and their respective StringTranslations.Text if it exists, OR their StringKeys.Name if it didn't exist. It is perfect at providing any one of them, but not at all. Basically, it's to enforce that if a language does not have a translation for a specific key, then the default is to use StringKeys.Name which is of StringKeys.DefaultLanguageId translation. (Ideally, it would not even do that, but instead load the translation for StringKeys.DefaultLanguageId, which I can do myself if pointed in the right direction for the rest of the query.)

I've spent a LOT of time on this, and I know if I were to just write it in C# (like I usually do) it would be done by now. I want to do this in SQL, and I'm having trouble getting the output I like.

The only caveat, is I want to limit the number of actual queries applied. All columns are indexed and such as I like them for now, and without real stress-testing I cannot index them further.

Edit: Another note, I'm trying to keep the database as normalized as possible, so I don't want to duplicate things if I can avoid it.

Given the exact query below, it outputs:

Ideally, I would like to be able to omit the specific SupportCategories.Id, and get all of them, as so (regardless if language 38 English was used, or 48 French, or ANY other language at the moment):

Given the example above, the following output would be desired (updated with French example):

(Yes, I know technically that's wrong from a consistency standpoint, but it's what would be desired in the situation.)

Small updated, I did change the structure of the dbo.Languages table, and drop the Id (int) column from it, and replace it with Abbreviation (which is now renamed to Id, and all relative Foreign-Keys and and relationships updated). From a technical standpoint, this is a more appropriate setup in my opinion due to the fact that the table is limited to ISO 639-1 codes, which are unique to begin with.

So: the question, how could I modify this query to return everything from SupportCategories and then return either StringTranslations.Text for that StringKeys.Id, Languages.Id combination, or the StringKeys.Name if it did NOT exist?

My initial thought, is that I could somehow cast the current query to another temporary type as another subquery, and wrap this query in yet another SELECT statement and select the two fields I want (SupportCategories.Id and Result).

If I don't find anything, I'll just do the standard method I typically use which is to load all the SupportCategories into my C# project, and then with it run the query I have above manually against each SupportCategories.Id.

Thanks for any and all suggestions/comments/critique.

Also, I apologize for it being absurdly long, I just don't want any ambiguity. I'm often on StackOverflow and see questions that lack substance, didn't wish to make that mistake here.

Here is the first approach I came up with:

You can probably do similar things with UNION/EXCEPT but I suspect this will almost always lead to multiple scans against the same objects.

An alternative solution that avoids the IN and the grouping in Aaron's answer:

As noted, the FORCESEEK hint is only required to get the most efficient-looking plan due to the low cardinality of the LanguageStringTranslations table with the sample data provided. With more rows, the optimizer will choose an index seek naturally.

The execution plan itself has an interesting feature:

Not the answer you're looking for? Browse other questions tagged sql-server t-sql sql-server-2014 or ask your own question.

3
Best practices for handling language
9
Finding all joins required to programmatically join a table
2
MSSQL Select all parent rows for which exists a combination of children rows with desired value
1
Replacement for Nested SELECT statements for every row in SELECT clause
4
Query All Databases Listed In Table
3
Tuning a query with temp table join
0
How to SELECT DISTINCT records with INNER JOIN?