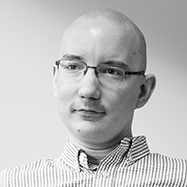 Robert Price resides in the UK, and works as a Database Administrator for Lovehoney.

Before joining Lovehoney, he led a career in sound engineering, with his formal background in music and sound design from the University of Manchester, and operated a successful freelance career working for broadcasting organisations such as the BBC, brands such as Sony and agencies including Urban Splash, providing unique sound design solutions for landmarks including the Bullring and Rotunda, in Birmingham.

In 2003, he started working in the banking sector with MBNA in analytical roles, maintaining databases, producing revenue reports and ensuring compliance and consistency needs were met.

In 2007, he started working with Themis Analytics as Lead QA Analyst, working heavily with SQL databases and scripting automation procedures. In 2011, he moved into the position of Database Administrator.