I have a database design and I'm having trouble with two tables. I have a Users table, and a Properties table. The Properties table may only have 0, 1, or 2 users, let's call them owner and tenant, and only one of each (per property), and a User may be an owner or a tenant in many Properties.

So, here are my two options according to the case:

Which is the best design option?

So, (1) after we engaged in some deliberations via comments and chat, and (2) once you discussed the possibilities with your customer and colleagues, it has been defined that, in fact:

Therefore —in your business context— among other aspects, there are two distinct conceptual-level associations (or relationships) of cardinality many-to-many (M:N) between the entity types Property and User.

Consequently, I have created an IDEF1X1 diagram that consolidates the business rules formulated above, which is shown in Figure 1: 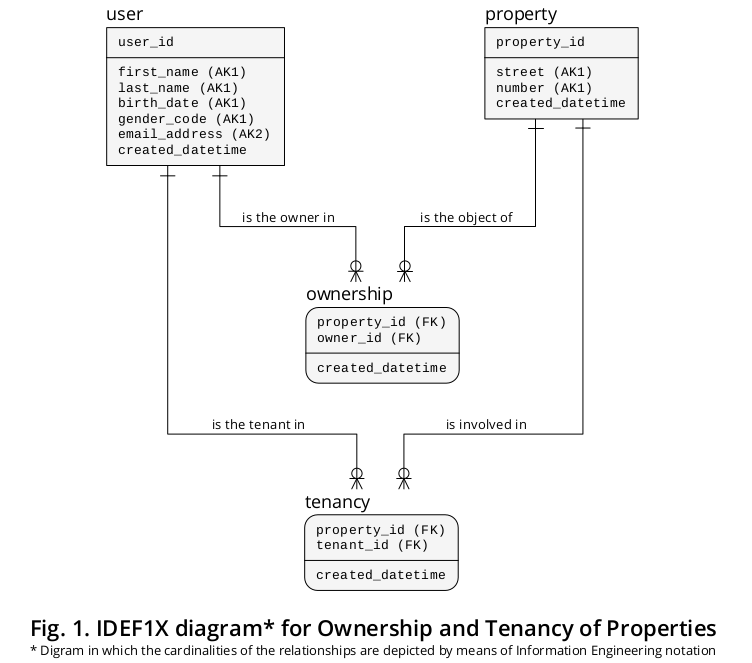 As demonstrated, every entity type —be it associative or independent— is portrayed by means of its individual box.

I depicted (a) ownership and (b) tenancy as two different associative entity types since, although very similar, they represent the prototypes of two distinct things of interest in you business domain, so it is very convenient to manage them separately because, e.g.:

It is worth to mention that, in the diagram, the user_id attribute migrates from (i) the user entity type to (ii) ownership and (ii) tenancy as owner_id and tenant_id respectively —both quite descriptive role names that you provided in the question—.

Then, based on the IDEF1X diagram detailed above, I wrote the expository DDL layout that is declared as follows:

Hence, in such logical-level design:

All of this in agreement with the stipulations by Dr. Edgar Frank Codd in his relational model (as far as the capabilities of the Structured Query Language permit at the time of writing).

Of course, with this logical layout you can still, e.g., derive in BOOLEAN form whether a given User is the Owner of a particular Property or not, with the aid of a SELECT operation that produces a scalar value that evaluates to either 'True' or 'False', which can be accessed from one or more (present or future) application programs sharing this database.

Covering the initial business rules with the same logical-level arrangement

These aspects are now mostly anecdotical, but some of the initial business rules were:

And they can be coped with using the same logical design previously discussed declaring the property_id column as an ALTERNATE KEY in both the ownership and the tenancy tables, via two more constraints, i.e.:

This shows other facet (that can be of help for a future visitor) of the versatility offered by the arrangement proposed in this answer.

1 Integration Definition for Information Modeling (IDEF1X) is a highly recommendable data modeling technique that was established as a standard in december 1993 by the United States National Institute of Standards and Technology (NIST). It is solidly based on (a) some of the theoretical works authored by the originator of the relational model, i.e., Dr. E. F. Codd; on (b) the entity-relationship view, developed by Dr. P. P. Chen; and also on (c) the Logical Database Design Technique, created by Robert G. Brown.

Not the answer you're looking for? Browse other questions tagged mysql database-design schema or ask your own question.

3
How can I model this relationship?
0
How should I model this data?
2
designing server side database to store user-specific data
3
Model with variable number of "properties" of different types.
0
is this database structure correct?
5
Dog Adoption Database Design
2
Defining two distinct relationships between a user table and a company table
5
Designing a database structure for companies and stock owners
0
What are the pros/cons of between these 2 database design options where the join table can have 2 or 3 foreign keys?
0
The possibility to define a composite unique constraint for specific cases