I have a select statement within a procedure that is causing me some grief at the moment. The query estimates about 100 million rows and that in turn grants large chunks of memory (about 8 gigs per procedure call), which then in turn results in extreme memory pressure on the database instance.

At the same time if I set the CE model to 70 using QUERYTRACEON 9481, I get perfect estimates

I'm very interested to understand why changing to an older CE model gives me a better estimate for the query.

Additionally, I also see bizarre columns with no statistics warnings. 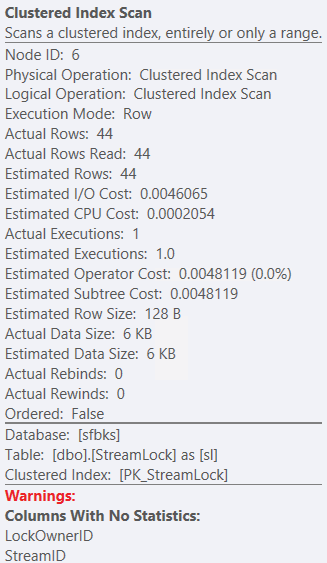 But at the same time I can see that I do have statistics for those columns in my table. I also tried creating a multi-column statistic, figured I'd give that a try as well. But it didn't really help either.

If I update the statistics, the issue almost immediately resolves btw and it creates a better new plan (to make sure a recompile isn't really that resolves the issue, I did remove the procedure and plan hash from the cache before updating the stats )

This is the select statement in question:

So, just to summarize my questions:

Edit2: An update - As Josh pointed out, I enabled T4199 and it makes an enormous difference in memory grants, from 8 gigs down to 50 megs. Although the estimates are still wacky and more importantly I still get those pesky warnings about "columns without statistics". There are no warnings when I use the old CE model. So, I'm still wondering why am I getting those even with T4199 turned ON? Plan XML with T4199 available here

An additional note - The statistics were sampled when there were only 4 rows in the table. 40 more rows were added since then. If I update the stats manually, the warning goes away and it creates a new different plan with really good estimates (IIUC the stats won't update automatically until the rowmodctr hits 500 for tiny tables). If the stats were truly out of date, (goes back to the previous question), why doesn't the old CE model reflect that? Plan XML with just the updated stats available here

Edit3: So, I took another look at this, and it certainly looks like my statistics for the the tiny table was out of date. I couldn't find this documented, but it looks like if my table has less than 500 rows, then the statistics becomes outdated after the rowmodctr is modified 10x the times of the sampled value. For example: if my table was sampled at 5 rows, I get a new plan (and a terrible one) when the total number of rows hits 51.

Here are a couple of screenshots that shows this behavior:

I was able to reproduce this behavior until sampling value equaled 49. So, at rowcount=490 I have a good plan, and as soon the row count is at 491, I get a sub optimal plan. So, I guess I will have to adjust my update statistics job a bit, perhaps even create an exception to frequently update it than my other tables.

It sounds like you have encountered this bug with the SQL Server 2014 ("new") cardinality estimator:

When the join predicate uses other conditions than equality or a combination of equalities, the estimated number of rows of specific types in joins differs from the actual number of rows that are processed. In this situation, the query performance decreases, and because the query requests a large memory grant, the overall server performance decreases.

(the mix of equality predicates, and the increased memory grant, seem to match your situation)

And from the "solution" section:

Note To make the fix take effect for the second issue described in this article, enable trace flag 4199.

So try enabling that fix at the query level to see if it resolves the problem:

Consider turning that trace flag on at the server level as a global startup flag, as there are corrections to many issues behind that flag. You can read some discussion about it on the site here: Trace Flag 4199 - Enable globally?

Why am I seeing warnings related to missing statistics when they are already present?

After a little more research, it sounds like the SQL Server 2014 CE is looking for a multi-column statistic, but the other columns are just not reported in the warning. So that part of the situation is probably a red herring. The Legacy CE just isn't looking for the same stats, so it doesn't produce the warning.

If the stats were truly out of date, (goes back to the previous question), why doesn't the old CE model reflect that?

I don't know enough about the intricacies of the cardinality estimators to answer this part in detail. But I can say that the two CEs are just different. They will make different choices, some better some worse, based on the out-of-date stats. The Legacy CE seems to cope better with out-of-date stats in this specific case, while the 2014 CE goes off track quite a bit (but corrects with better stats).

Not the answer you're looking for? Browse other questions tagged sql-server sql-server-2014 query-performance performance-tuning or ask your own question.