I have a simple script that gets four random numbers (1 through 4) and then joins back to get the matching database_id number. When I run the script with a LEFT JOIN, I get four rows back every time (the expected result). However, when I run it with an INNER JOIN, I get a varying number of rows -- sometimes two, sometimes eight.

Logically, there shouldn't be any difference because I know rows with database_ids 1-4 exist in sys.databases. And because we're selecting from the random number table with four rows (as opposed to joining to it), there should never be any more than four rows returned.

This happens in both SQL Server 2012 and 2014. What is causing the INNER JOIN to return varying numbers of rows?

Still digging into just why it waits so late to do it, but currently reading this post by Paul White (https://sql.kiwi/2012/09/compute-scalars-expressions-and-execution-plan-performance.html). Perhaps it has something to do with the fact that NEWID is not deterministic?

This might give some insight until one of the smarter folks on the site chimes in.

I put the random results into a temporary table and I consistently get 4 result regardless of the join type.

If I compare query plans between your second query and the variation with a table variable, I can see there's a definite difference between the two. The red X is No Join Predicate so that seems really odd to my caveman developer brain

If I eliminate the random bit of the query to a constant 1 % (4), my plan looks better but the Compute Scalar was eliminated so that led me to look closer 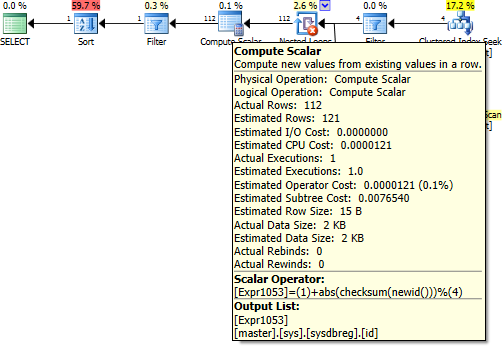 It's computing the expression for the random number after the join. Whether that's expected, I still leave to the internal wizards on the site but at least that's why you're getting variable results in your join.

For those playing along at home, the above query plans were generated from a 2008 R2 instance. The 2014 plans look different but the Compute Scalar operation remains after the join.

This is the query plan for a 2014 instance using the newid expression.

This apparently is by design, Connect issue here. Thanks to @paulWhite for knowing that existed.

Not the answer you're looking for? Browse other questions tagged sql-server t-sql or ask your own question.

26
SQL Server splits A <> B into A < B OR A > B, yielding strange results if B is non-deterministic

9
NEWID() In Joined Virtual Table Causes Unintended Cross Apply Behavior
0
SQL Server Index Scan Actual Executions
3
Update all rows from a table with random foreign key from another table
0
comparing left join and outer apply doing the same thing
6
Running query against DMVs for Query Stats and Execution Plans joined to sys.databases
11
Odd Stream Aggregate behaviour
3
split a row into multiple rows in sql server according to a specific column
3
How can I get satisfactory random numbers from the RAND function (or elsewhere)?