If a query triggers a statistics update and times out are the statistics still updated?

I have a fulltext query which is usually very fast but may time out when it causes a statistics update since statistics updating is very slow on this database. Usually the query "recovers" to normal speed after the statistics have been updated but I have seen a case where the query always times out which I can only explain with the fact that the statistics are never updated (or so I think).

Unfortunately I cannot reproduce the problem at this point since we switched statistics updating to “Auto Update Statistics Asynchronously” to prevent the timeout from happening in the first place (slightly out of date statistics are not a problem for us).

So my question is

I found a reference that states otherwise - if that is the case I cannot explain the continuously timing out query case.

That was actually my question at AskSSC. I should have just tested it myself as I accepted an incorrect answer.

With the following test table

And the following test code

It can be seen that the stats creation occurs on the same spid as the query and so this also aborts the creation of stats on column a. At the end of the process only one set of stats exists on the table.

The above refers to stats creation, to test auto update of the stats I ran the above query without a timeout so both sets of stats were successfully created then updated all columns of all rows so that the stats would be out of date and re-ran the test. The trace for that is pretty similar

Finally just for completeness with SET AUTO_UPDATE_STATISTICS_ASYNC ON the trace looks as follows. It can be seen that system spids are used to perform the operation and they are unaffected by the query timeout as would be expected. 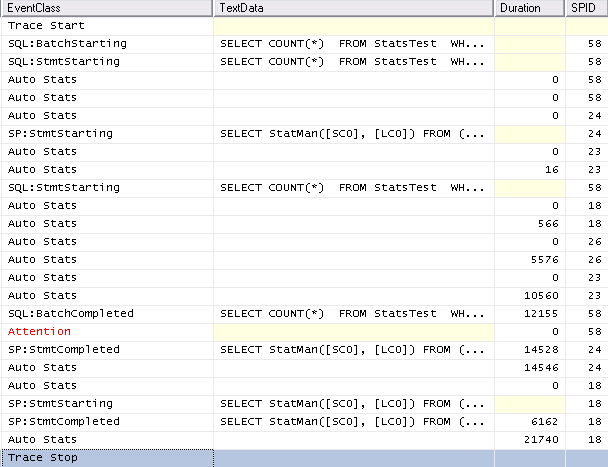 As far as I remember statistics can be created by queries if missing, but they are updated only if needed (certain percentage of modifications of the data in the table) when they are set to autoupdate. So there is no guarantee the statistics are updated.

Not the answer you're looking for? Browse other questions tagged sql-server sql-server-2005 statistics or ask your own question.

3
Query requires 'Update statistics' very often in SQL Server
1
In what circumstances I am more likely to benefit from auto update stats async on?
2
How can I update statistics adding the data of the last day only?
18
How to prevent statistics creation on a column?
1
Index Reorgs Blocking Statistics Updates Blocking Inserts
1
Why are my statistics getting out of date so quickly?
9
Statistics disappearing/empty randomly throughout the day
4
Query execution plan is horrible until Statistics are Updated
0
Which SQL table statistics are used after they are updated when NORECOMPUTE is turned on?
0
Query optimizer triggering statistics update seems to be slowing down queries