Please, can someone tell me what the behavior would be if we had an unexpected SQL Server shut down at node 1?

Please, can someone tell me what the behavior would be if we had an unexpected SQL Server shut down at node 1?

The failover would happen and the failover would be according to order in which nodes were added to Availability groups and configured for automatic failover. Like below(All Images taken from This MSDN Blog

This is SQL Server 2016 where you have option to set 3 replicas with automatic failover. Now user added replicas such that Node 2 and Node 3 where added one after other. Now in this case if Node1 goes down it will failover to Node 2. The exact failover sequence can be seen from WSFC GUI. For this AG it would be like below 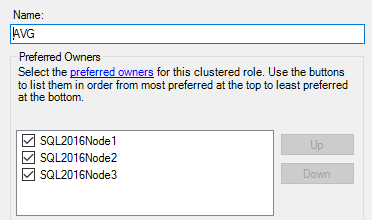 The node weight would not come into picture here. I little idea how you ahve configured the AG so go ahead look into cluster GUI and you can see the order in which it would failover.

Since we talked about node weight I would suggest you to keep node weight for DR replicas as 0 this will make ODD number of votes in cluster. 2 nodes at DC and 1 FS witness. You would not want DR to take part in voting which is sitting out far somewhere and hardly have any idea

Accordingly to the quorum configuration DC2 part will alive (due to majority of votes) and DC1 will die (due to minority of votes). But as soon as synchronization between DC1 and DC2 is asynchronous there won't be automatic failover to DC2.

So you will end up with the situation when DC2 is alive but can not handle DB workload, because AG will wait manual intervention (allow_data_loss).

To avoid such situation, you need to assign votes like that

In that configuration AG will fail over to the NODE2 (DC1).

You'd better to explain the purpose of DC2. Is it disaster recovery DC or you need it for read scale or both?

Not the answer you're looking for? Browse other questions tagged sql-server-2016 availability-groups clustering or ask your own question.