MySQL Master - Slave replication stops after 20min with no errors

Everything works fine for about 20min, I can see changes replicating across but then after about 20min replication just stops.

However, if I restart the slave MySQL instance, replication begins again and catches up.

Restarting the master has no effect on the replication it stays broken.

When in the broken non-replicating state this is the output from the slave and master. 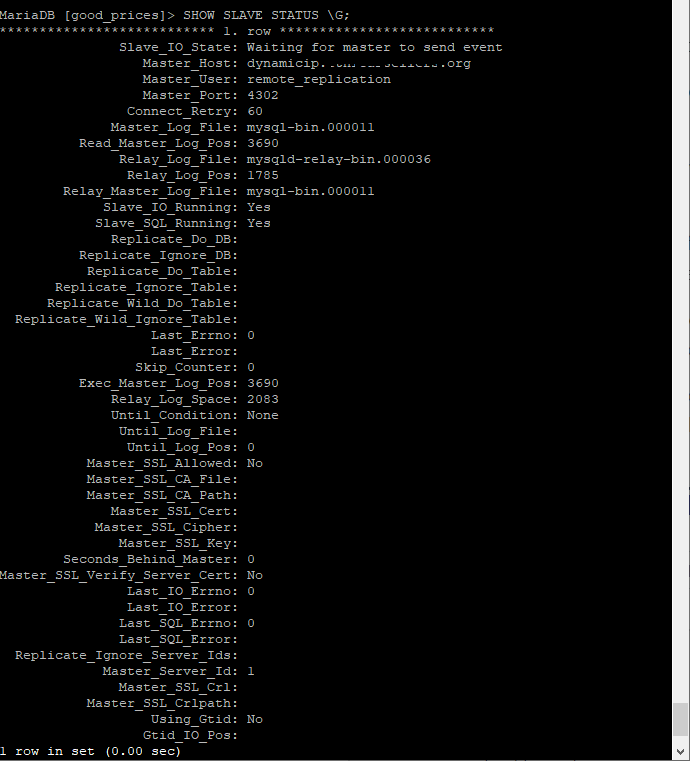 So it looks like it thinks its caught up, but it hasn't, no matter how long I leave it.

I've used netcat to test the connection and I know it can see the master still, plus when I restart MySQL it works right away.

The my.cnf config has not been changed apart from adding the server ID and this is how I configured the slave initally CHANGE MASTER TO MASTER_HOST='dynamicip.xxxxxxx.org', MASTER_PORT = 4302, MASTER_USER='remote_replication', MASTER_PASSWORD='xxxxxxxxxx', MASTER_LOG_FILE='mysql-bin.000006', MASTER_LOG_POS=328;

Where would I begin to troubleshoot this?

So it appears the data does replicate over eventually but it takes a least 50 minutes, and its tiny bits of data I'm testing it with.

I've switched the hostname dymanic.****.org to an IP address in case it was Cloudflare doing something weird but that hasn't fixed it. I also tried skip-host-cache before that.

I've also switched innodb_flush_log_at_trx_commit from 0 to 1. Traceroute looks fine. I can see the statements in the binlog file on the master.

Interestingly using STOP SLAVE and START SALVE kicks it back into action for a while before it begins having the issue again.

SHOW PROCESSLIST on the Master shows that the I/O thread is sometimes present and sometimes not, not sure what that means..

The first thing I would do is check the network between the Master and Slave. Why ???

I once had an occasion where I saw a Slave with SHOW SLAVE STATUS\G looking exactly as you have it, but it was not replicating. This is what actually happened:

What I recommend is this

Please let us know what you found in your troubleshooting

Not the answer you're looking for? Browse other questions tagged mysql replication mariadb or ask your own question.