Trying to map postal codes to their respective cities, but running into some issues

I am creating a database of Countries, Regions, Cities and Postal Codes. Here's an example to give an idea of the database structure as it is now:

For the city database, I grabbed postal code data from Geonames, and I cross referenced this data with USPS. In both dumps, for '36088' I get Tuskegee Institute. So, when I do the following:

There are many problems here (e.g., the address: I downloaded university data from IPEDS and obviously their address does not match Google Places). However, what I want to focus on is the issue with my city table. I feel like the schema here may not be the best approach to the problem, but I'm not really sure what the best approach might be. Do I create separate city and postal code tables? But, in the end, how do I associate 36088 with Tuskegee, AL? Is there a better source here that I have just not found?

A Possible Solution (with problems)

Say I switched up the DB schema, such that it looked like this: 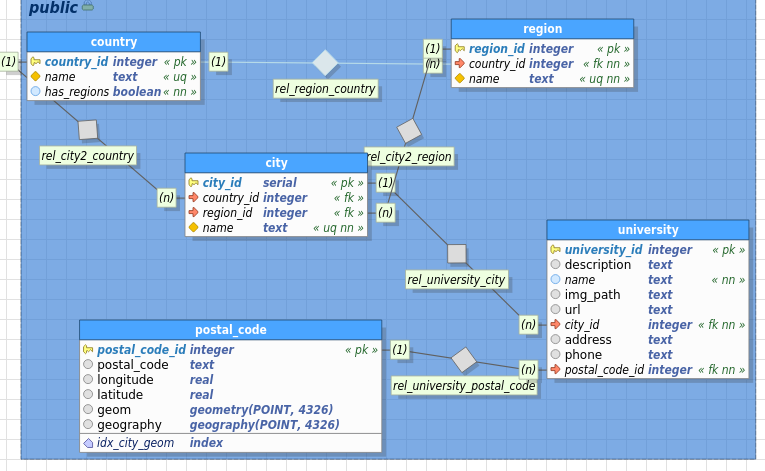 Then, I could have the postal code and city be independent of each other. Thus, the university table points to Tuskegee for city_id, and the 36088 for postal code. However, I now have an issue. If someone types in a city, I cannot tell them cities within a certain radius. I could get the lat/long for cities and create a geog column in the city table as well, but that seems a bad solution. I could associate cities with postal codes (i.e., city_id column in postal_codes table), but then I am faced with the same problem of mapping 36088 to Tuskegee, or having 'Tuskegee Institute' in my city table (which I obviously don't want).

An Interesting Side Note

CityGrid seems to have completely ignored the problem I am facing, going with Tuskegee Inst for the city.

As well, a USPS lookup for this zip code tells me the following:

TUSKEGEE INSTITUTE AL
Other acceptable cities for 36088 are

So, it seems that Tuskegee should also be an acceptable name for USPS, but it's not listed as such.

Your question is not very clear.

A mailing address needs a zip AND some other info. Usually it is a city OR a "surveyed area" such as a street address (which in turn may belong to a city).

A university also likely has more than one address ;)

I would use a little table inheritance and give country, state/prov, city and surveyed area all the same supertype, that way you can point a single foreign key at any of them.

Not the answer you're looking for? Browse other questions tagged postgresql database-design relational-theory postgis or ask your own question.

4
Geographic Hierarchies in a OLAP Cube / Data Warehouse
0
Airport Database Design guidance required
0
Array column vs another table when the relationship is quite small
2
Design for user profile information and track changes
1
Database Design and structure
26
What problems are solved by splitting street addresses into individual columns?
1
Person-to-Address Relationship Cardinality — One-to-One or Many-to-One (In this context)?
0
Address Parts - Hierarchy vs Flat
5
Which columns should be indexed when all may be used in different search queries?